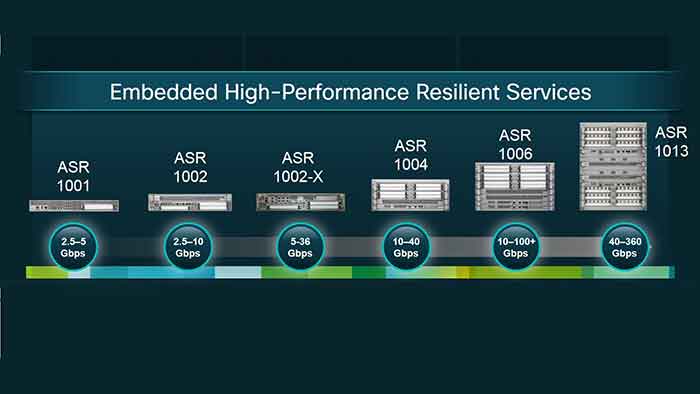 Cisco ASR 1000 routers are engineered for reliability and performance, with industry-leading advancements in silicon, throughput, and security to help your business succeed in a digital world that’s always on. Also, Cisco ASR1000 is a scalable device for both enterprise and service provider network.

ASR 1000 router benefits from IOS XE software which is a virtualized implementation of the Cisco IOS code that is comprised of Cisco IOS, middleware and platform software. The IOS XE software runs active and backup copies that provide high availability and the use of Cisco IOS In-Service-Software-Upgrade (ISSU).

See, prioritize, and optimize application performance securely over any connection for more than 1000 applications with intelligence and data center-class quality of service (QoS).

Built on the Cisco QuantumFlow Processor, the ASR 1000 Series has a separate control and forwarding plane, supporting a multiservice design. Increase the performance and resiliency of integrated WAN edge services without hardware upgrades.

QuantumFlow processors is one of ASR 1000 routers main advantages that resides on the ESP. QFP is a fully-integrated, programable router engine that delivers high performance edge-based services. The major components of the QFP are the packet processor that will process any packet in any flow and the Traffic Manager that schedules all traffic for all interfaces up to the entire system bandwidth.

All packets are processed through QFP and stored in an on-chip packet memory that handed off to a packet processing element(PPE) where processed. Once the packet has completed processing, it is handed off to the buffer, queening and storing (BQS) chip before being sent to the egress SIP. SIP provides SPA aggregations, IO Control Processor (IOCP), Interconnect and Network timing circuitry services.

Overall, leveraging ASR 1013 chassis, these routers can support up to 200Gbps throughput.

In the following table, you can find differences between different ASR 1000 models:

Beginning with release 16.2, the concept of a universal software image in combination with an honor-based technology package license was introduced. Customers must purchase the following part numbers to enable feature sets.

Note: The IP Services image does include the IPSec encryption features. But you still need to purchase the FLASR1-IPSEC-RTU license in order to USE it.

Currently, Cisco ASR 1000 Routers, operating in autonomous mode, support Cisco smart licensing method. As an admin, you need to purchase an ASR smart license then through your smart account, request for the registration Token. Then you can use all your product instances completely. Also, all product instances would be permanently registered by purchasing Cisco PLR license.

This product has some updates that support up to 100 Gbps. You can click on “order now” and receive the details that you need by talking to our specialists.

Yes, Cisco SD-WAN capability can be enabled on the Cisco ASR 1000 series platforms with IOS-XE.

What is ASR 1000 SD-WAN security features?